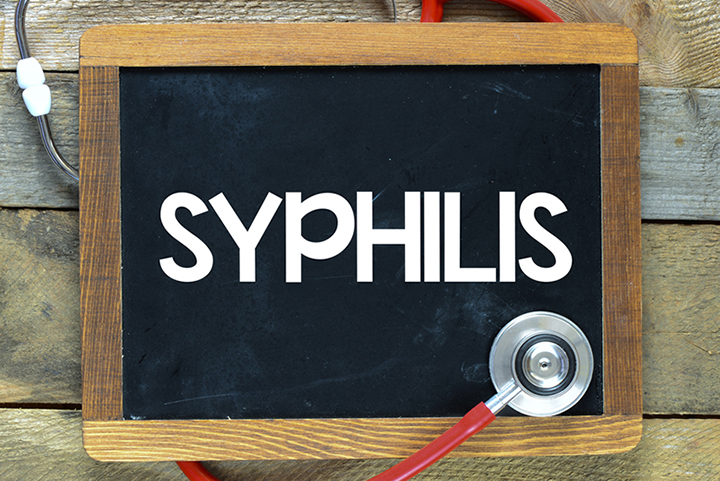 It is a Sexually Transmitted Disease (STD) caused by the bacterium Treponema pallidum. It can present itself in several clinical manifestations and different stages. This disease is a silent evil. After the initial infection, the bacteria can remain in the person’s body for decades before becoming an apparent problem.

THE STAGES AND SYMPTOMS OF SYPHILIS

Syphilis develops at different stages and symptoms vary as the disease progresses. Generally, the disease evolves in the following stages: primary, secondary, latent, and tertiary.

The symptoms of syphilis manifest between 3 and 12 weeks after infection, starting with the onset of a non-bleeding genital wound. Though painless, it releases a clear liquid when rubbed.

This is the early stage of the disease, which appears about 3 weeks after the infection. This stage is characterized by the appearance of hard cancer and small red lesions on the genital organs that eventually disappear after 4 or 5 weeks without leaving scars.

The usually single wound appears at the site of entry of the bacteria (penis, vulva, vagina, cervix, anus, mouth, or other sites of the skin), which appears 10 to 90 days after the infection. It does not hurt, does not itch, does not burn, and does not have pus. Additionally, it may be accompanied by lumps in the groin.

These symptoms appear about 6 to 8 weeks after the disappearance of the lesions caused by primary syphilis. In this new phase, the lesions appear scattered on the skin and internal organs of the body. Some symptoms of secondary syphilis include:

This phase continues during the first two years of the disease and arises in the form of outbreaks that regress spontaneously but are becoming more and more enduring.

The symptoms are the same as those of secondary syphilis, but the infection spreads to areas such as the brain, nervous system, skin, bones, joints, eyes, arteries, liver, and even the heart. Approximately 15 to 30% of untreated infected individuals develop the tertiary stage of the disease.

It appears in patients who have not been able to spontaneously combat the disease in its secondary phase or have not adequately treated the disease. In this stage, syphilis is characterized by the following:

These symptoms usually arise after 10 to 30 years of initial infection, and when the individual is not treated. Therefore, to avoid complications in other organs of the body, treatment should be done soon after the onset of the first syphilis symptoms.

WHAT IS THE TREATMENT FOR SYPHILIS?

It has a cure and can be easily treated with penicillin injections. However, it should be started as soon as possible to prevent the emergence of serious complications in other organs such as the brain, heart, and eyes.